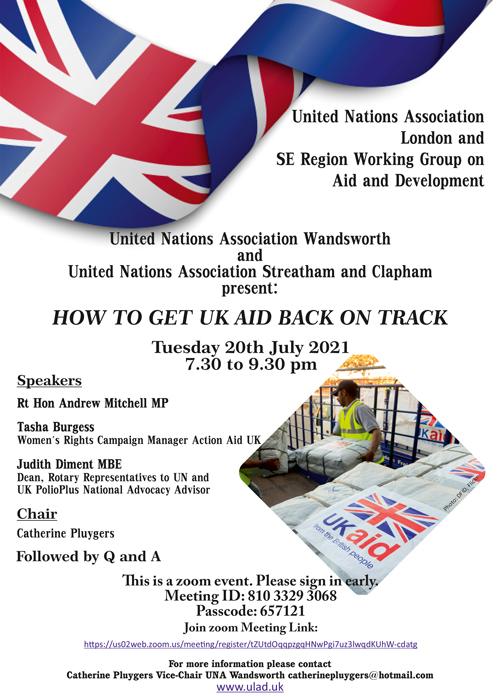 
July 12 2021
CALL FOR VOLUNTEERS — UNA AID ACTIVISTS IN LONDON AND SE ENGLAND
﻿Dear Chairs and Fellow UNA members,
We wish to establish a network of volunteers who would be interested in supporting the cause of getting UK aid giving restored and who are concerned about the devastating impact of the aid cuts.
We need one person in each parliamentary constituency to lobby MPs and generally raise awareness of the issue. They may well also wish to liaise with other local NGOs.
Please could the branch chairs tell us which constituencies their branch covers. And we would be grateful if you could help with finding a branch member for each constituency.
We have linked up with Rachel Pallett of BOND who is concentrating on this area and has kindly offered to help provide the expertise and resource material we need.
I look forward to hearing from you.
Please reply to
catherinepluygers@hotmail.com

UK NGO’s CONDEMN TRULY SHOCKING LACK OF GOVERNMENT AID TRANSPARENCY
A coalition of NGO’s condemn lack of transparency on the UK cuts to development aid.
According to Bond ‘little or no information is being made publicly available’.

Despite the UK being elected to the Human Rights Council (2021-3) it has proposed a budget cut from 0.7 to 0.5% of GNI which will affect millions of the most vulnerable people
facing food insecurity, in need of humanitarian assistance or an education.

NGO’s are shocked by the impending cuts and how little information they have had about
where these will land. And they are also shocked by the lack of consultation in 2020
from the government which has been considered as a leader in the field for communication
and transparency. And they feel largely excluded from the huge decisions made in 2020.

AID IS NOT DEVELOPMENT
The UK has been a generous donor to the South in trying to alleviate some of the many challenges that have confronted the countries with which we have had long-standing links. The general public has been extremely generous in trying to overcome some incredible disasters.
We need to be very clear that giving aid to someone who might be in need is different from helping them to develop. A few coins do not address any of those issues; it requires a much longer and patient approach involving different players. The horrible war in the Yemen, the Rohingya refugees in camps in Bangladesh, the women starving in Afghanistan because they have been prevented by the Taliban to earn a living – all deserve aid and relief, immediately. And there seems to be more and more of these disasters and we know that more will emerge as the climate catastrophe unfolds.
But we must not forget that the main cause of death in the Global South is lack of food. Some 9 million people per years die because of lack of food. That is 30,000 per day, 1,250 per hour. These are preventable death.  The world produces enough food to feed everyone.  The issue is the diversion of food; the bulk of the corn exported from Latin America goes to China to feed animals to feed the better off people of that nation. To bring the issue closer to us – let us look at Africa. In the latest data from the three UN agencies that deal with food, plus UNICEF and WHO, of the estimated 1.347 millionpopulation of Africa, those in severe food insecurity total 347 million; the cost of a healthy diet is $4.37(£3.60) per day; and 80.90% of the population areunable to get a healthy diet.
Yet, according to the African Development Bank, in 1980 Africa was not importing any food. Now, it is importing between $20 and $25 billion per year. The figures are projected to increase as population increases and climatic conditions worsen. Add to that the instability of the Sahel and of the Horn and you have a rapid increase in demand.
The poorest of the poor- as a group – are the nomads. We cannot reach them. The second level of poverty are the refugees. We can help them through efficient food deliveries. But the largest number of people in the world who are constantly on the bread line – literally – are farmers who work on their own little farms and probably account for 60% of the food produced in the world.  That is where development should commence. And here we have failed. Increasing the amount of aid we give will not obviate the situation. A different approach might.
Here we see the parting of the ways. Governments have lent money to governments. They should help them to repay those loans, rout out corruption, improving their ports and airports. But the development support that can be provided to people, to individuals, to communities is of a different type. We need to create an agenda in which the poorest receive the support they ask for – to become better farmers. That means to enable them to achieve food sovereignty – the right to own their own lands and to grow their own food, for their own needs. That means not to force them to produce more primary commodities – tobacco, tea, coffee, sugar, cotton, cocoa – that we force them to grow to repay their debts to us and that we do not allow them to process. That in turn forces them to sell their lands to the foreign companies – or to their own elites – and become dispossessed.We need to educate everybody, especially women, the mainstay of development. We need to support the adoption of agro-ecological techniques to maintain their own varieties of food. We have done too little of that. We have given too much money to tertiary education establishments. The result is that they produce doctors and we attract them because we pay better. We force them to export unprocessed primary commodities but do not allow them to process them. Wepush for them to adopt more chemically imported seeds, fertilisers, pesticides. Here we can see the difference between what might be the purview of governments and what should remain a peoples-to-peoples relationship of long-term development.
It is not more aid money that needs to be put in international development. It is more targeted support to develop the poorest of the earth where they are at – not where we wish them to be. General primary education to all, particularly enabling girls to access it, would be the best way for them to decide about the number of children they might want. We do not have that right, much as we think that is their priority. The same applies to vaccines; we might think it should be their priority. We might need them to get a vaccine, because it protects us, but that is not our prerogative. The best way to empower them is to provide universal primary education.  We have neglected it. It is the best compromise between what they want and what we can offer. It is development.
Benny Dembitzer,16th September 2021